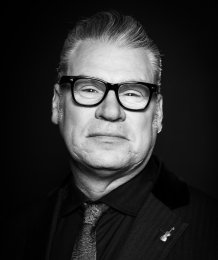 Influential film critic Mark Kermode has been appointed as an Honorary Professor at the University of Exeter.

Professor Kermode will join the University’s film studies department – ranked as among the best in the world, to collaborate with academics on teaching programmes and research.

Professor Kermode, who wrote his PhD thesis on horror fiction, is chief film critic for the Observer, contributes to the magazine Sight & Sound, and has co-presented the award-winning BBC Radio 5 Live show Kermode and Mayo’s Film Review since 2001. He recently wrote and presented the BBC Four documentary series Mark Kermode’s Secrets of Cinema, and this week launched his film podcast Kermode on Film.

Professor Andrew Thorpe, Pro Vice Chancellor and Executive Dean of the College of Humanities, said: “We are very excited about Professor Kermode joining the film studies department at Exeter as an Honorary Professor and building closer links with him through our teaching programmes and research.

“Professor Kermode’s passion for film and outstanding ability to explain film history and production in an engaging and entertaining way has made him one of our most respected critics and broadcasters. We are very much looking forward to working with him.”

Professor Kermode is also a musician, a founding member and double bass player in the skiffle band he Dodge Brothers. He began his career as a journalist, in Manchester’s City Life and Time Out and then the NME. He moved into regular radio broadcasting in the early nineties with Danny Baker’s Morning Edition on Radio 5, and worked with Mark Radcliffe and Simon Mayo on BBC Radio 1.

Books written by Professor Kermode include, It’s Only a Movie in 2010, The Good, the Bad and the Multiplex in 2011 and How does it Feel? published this year. His 2013 book Hatchet Job: Love Movies, Hate Critics examined the need for professional film criticism in an area of increasing numbers of online bloggers and amateur critics.

Professor Kermode will speak about How Does it Feel? – which describes his attempts to become a popstar and love of music at Exeter’s Northcott Theatre on Saturday, 28 October. He will be signing copies of the book after the show.

Professor Kermode has previously visited the University of Exeter’s Bill Douglas Cinema Museum, one of the largest cinema museums in the country with 80,000 extraordinary objects. He has also taken part in talks and events for University of Exeter students.