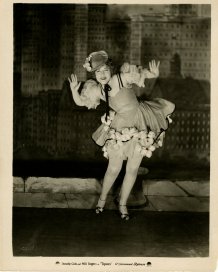 A still from the film Tiptoes (1927). Image courtesy of the Bill Douglas Cinema Museum

The only evidence left of lost films made in the golden era of silent movies can be seen for the first time after an unique collection was donated to one of the UK’s foremost cinema museums.

The collection, which gives an incredible insight into the British and European film industry in this period, was a bequest to the Bill Douglas Cinema Museum at the University of Exeter by the artist and photographer Townly Cooke (1949 - 2016), who loved silent cinema and went to great efforts to assemble a large collection of material on silent films from sources around the world.

The Townly Cooke Collection, made up of around 1,000 artefacts, has never been exhibited before and this is the first time it has been fully accessible to the public. The collection is unique because of the size and focus on specific filmmakers and this period within the silent era. Everything will be available to researchers and highlights are now on display at the Bill Douglas Cinema Museum, which is free of charge and open every day.

Many silent movies are lost to the ravages of time, leaving no way of knowing the joy they brought audiences almost a century ago. The collection includes stills from three films on the British Film Institute’s “Most Wanted” list of these lost movies - The Amazing Quest of Mr Ernest Bliss (1920), Mademoiselle from Armentieres (1927) and Tiptoes (1927).

Dr Phil Wickham, curator of the Bill Douglas Cinema Museum, said: “In many cases the images and ephemera in the collection are the only visual evidence of films that are now lost. The Townly Cooke collection is a wonderful addition to our holdings at the museum and a great opportunity for scholars and the public alike to discover more about this fascinating period of film history through these beautiful artefacts.

“The collection is a testimony to Townly's abilities as a collector and his ambition to share his collection with others after his death. We are very grateful for his generosity and to his family and estate and his friend Amran Vance in enabling the acquisition.”

Margaret Harris, Townly Cooke’s cousin and executor,said that “The Bill Douglas Cinema Museum is preserving and making available the collection that Townly put so much passion and time into putting together. He would have been very pleased to see the collection bringing knowledge and pleasure to others.”

The collection is predominantly made up of stills from films of the 1910s and 1920s and the bulk of these are from films made in Britain. Townly was especially interested in the work of Cecil Hepworth, the leading British producer of this period and the stars that worked in his productions, notably Alma Taylor and the glamour couple of the era; Henry Edwards and Chrissie White.

The collection features a large number of large-form advertising cards for Hepworth's productions, which include a number of production images from each film. There are also rare very early copies of the Picturegoer magazine and “pressbooks” for journalists for films including 1925’s The Rat, starring Ivor Novello.

Student volunteer Holly Johnson, who is helping to catalogue the images, said: “It’s been incredible to work with this collection, to get a glimpse into a period few people know about today. These film stars were some of the most famous people of their era, and it’s astonishing to think few now know their names.”