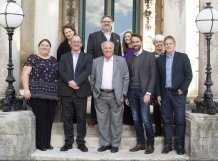 Experts are celebrating a pioneering partnership between the University of Exeter and the London Film School which gives students unique training in the movie industry.

Former BBC Chairman Greg Dyke, now LFS Chairman, and the new Director Gisli Snaer have visited the University of Exeter to discuss opportunities to deepen and strengthen the hugely successful relationship between the two organisations.

They were also able to meet new students studying for the LFS and University of Exeter joint MA in International Film Business. The course is run jointly by the two institutions and enables students to hone their filmmaking skills alongside their academic studies. Students develop a unique set of practical and theoretical skills related to the business of the film industry. The course is designed to train the next generation of innovative executives for the international film industry. Students learn about film finance and sales, distribution and marketing, creative management and development, digital strategy and festival curation and programming.

The MAIFB is just entering its fifth year and will welcome its 100th graduate at this year’s Winter Degree Congregation.

Kevin Keane, 21, from Dublin enrolled on the course because of his dual interests in film and accountancy. He said: “I have a degree in business, but I also really enjoy screenwriting and filmmaking. I want to combine both skills and learn more about raising finance and film production and organisation.”

Neyda Santana, from the Dominican Republic, enrolled on the course because she wants to be a film producer. She said: “I chose Exeter because I was impressed by the experience of academics and the access to facilities such as the Bill Douglas Cinema Museum. It’s great that we carry out research and learn both creative and business skills.”

Peter Bwire hopes to use his experience on the course to boost the film industry in his home country of Kenya. He said: “I graduated in 2015 in film technology and really want to work in the film industry, but there isn’t really one in Kenya. I tried starting my own company, but decided this course would help me fulfil my goals. Kenya needs people with the sort of skills this course is offering. I would love to distribute and market films made in Kenya around the world.”

London Film School (LFS) is the first film school in the UK. Since 1956 LFS has trained thousands of directors, cinematographers, editors and other film professionals now working across the globe. Alumni include Bill Douglas, the founder of Exeter’s Bill Douglas Cinema Museum. LFS is one of only three ‘Skillset Film Academies’, accredited by the UK film industry as a Centre of Excellence.