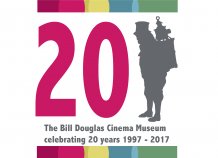 Film lovers are celebrating the 20th birthday of the UK’s foremost museum of moving image history.

Among the 80,000 extraordinary objects at The Bill Douglas Cinema Museum are the first book published in Britain describing a projected image from 1658 and a Lumière Cinématographe, the type of camera used to make and to project the first film shows.

Visitors to the museum will discover the history of  moving and projected images over nearly four centuries. The museum is a people’s history of the moving image, a diverse collection united by showing the audience’s experience.  It is also home to a wealth of material on Hollywood stars, as well as a constantly growing collection of merchandise produced for the blockbuster films enjoyed by audiences at the moment. The museum is free and open to all every day.

Many of the artefacts were collected over 30 years by the renowned filmmaker Bill Douglas, now acknowledged as one of Britain’s greatest directors, and his friend Peter Jewell, who shared his passion for film history and culture. After Bill’s death  Peter donated the collection, then around 50,000 objects, to the University of Exeter. The collection was catalogued and installed by experts led by Professor Richard Maltby and Dr Richard Crangle. In 1997 the museum opened its doors to the public for the first time.

Bill Douglas is best known for his trilogy of films about his impoverished childhood and his 1987 film Comrades, a powerful epic which tells the story of the Tolpuddle Martyrs and also references the history of pre-cinema.

Dr Phil Wickham, the curator of the Bill Douglas Cinema Museum, said: “The museum is now the foremost museum of moving image history in the UK – nowhere else can compare to its breadth, depth and accessibility. The museum and its collections are a unique asset for the University, and for the South West, and more and more people are discovering its delights. They delight our visitors, who range from small children to leading film critics, and eminent scholars.

“The Bill Douglas Cinema Museum is open to everybody and can be enjoyed by all. Attendances have quadrupled in the last five years as more and more people discover its delights. We welcome schoolchildren, pensioners and other local people as well as tourists from both the rest of the UK and around the world. The comments in our visitors’ book and on our social media reflect the thrill of discovering the collection and the stories it tells about moving images and their audiences.”

The collection has grown over the last 20 years thanks to kind donations by Peter and members of the public. The museum is now home to the archives of filmmakers such as Bill Douglas himself, and others working in British independent film such as Don Boyd, Gavrik Losey and James Mackay.

The museum is also used by academics for teaching and research, and film experts from around the world come to work with the artefacts and records in the collection. Artefacts from the museum are used by around 2,000 University of Exeter students annually, with many more using the museum’s digital collection. It is used across a range of disciplines and many students who have volunteered at the museum have gained jobs in the heritage and culture sectors.