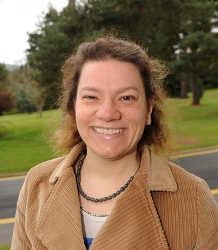 I grew up in Paignton, Devon, and was educated at the Universities of Southampton, Nottingham, Strasbourg and London. I also worked for a year as a Lectrice at Universite Michel de Montaigne in Bordeaux. I was appointed as a Lecturer in Film Studies at Queen's University Belfast in 2002, and returned to my home roots to work as a Lecturer in  Film Studies at Exeter in 2007. I was promoted to Associate Professor in January 2019.

My recent  book publications are:

Girls and Girlhood in Contemporary Cinema

While I have always been interested in questions of gender and representation in film since my PhD on female American stars in 1950s French cultural discourses, my research has recently taken a new direction into analysing representations of girls and girlhood from a range of different national cinemas. My interest in this is three-fold. First, I am fascinated by the way the figure of the girl has been taken up as an accessible way to debate the legacies of feminism and the question of opportunities and threats for women in contemporary Western cultures. Second, work on contemporary film and television cultures' representations of girls has tended to be dominated by Anglophone, particularly Hollywood Conglomerate, production, leading to an 'echo-chamber' effect where film is critiqued for its narrow range of representation. Through turning to other types and locations of production (from Indiewood, to Europe, to Asia) we can challenge this narrative and look for possibilities of a more diverse and diffuse experience of girlhood. This enables us to do all sorts of exciting things, such as examine how such globalising narratives as neo-liberalism and post-feminism might nevertheless be inflected by local differences; to explain why specific local conditions, such as institutional support, might enable young women to make film, as in France; to explore female directors' investments in, aesthetics of, and affective responses to, contemporary girl culture. Third, understanding some film as a privileged site to tarry with the complex and ambivalent emotions of girlhood enables us to ask questions about how girl audiences themselves might respond to this viewing, how this might shape their media consumption and production, and whether this might enable a productive dialogue about the experiences of being a girl in twenty-first century Europe.

I work on a range of directors from these perspectives, such as Celine Sciamma, Mia Hansen-Love, Delphine and Muriel Coulin, and especially Sofia Coppola.

Place and Space in Cinema

I understand cinema as fundamentally a spatial art: film both mechanically records and artistically interprets place. I trace the dynamic relation between film and place, in a range of studies, and in particular I have written on the liminal, wet-dry, nature-culture, beachscape and its central importance to French cinema, looking at its use in films by Rohmer, Ozon, Varda, Leconte, Blier, Breillat, Kurys, Lopes-Curval, Demy, Truffaut and Tati, and its industrial significance for the Cannes film festival.

Having produced an edited book of interviews from across Rohmer's career in 2013, I retain my unconditional love and passion for this most brilliant of filmmakers. My most recent project on Rohmer brought together my interest in female filmmaking and his films, as I discussed his 1980s work with female cinematographer Sophie Maintigneux.

I am always happy to hear from prospective doctoral students with proposals linked to my areas of research. I am especially interested in working with candidates on the following areas

I am currently working with the following students:

Clara Bradbury-Rance, AHRC funded, MRes 2010-2011. Queer Postfeminism and the films of Lisa Cholodenko, passed with distinction. Clara is now completing a PhD in Manchester with AHRC funding, under the supervision of Prof Jackie Stacey.

Conference Papers Given (since 2001)

I teach film modules across the departments of Modern Languages and English, working with a wide range of students from various backgrounds - some of whom have been studying films for several years, and others who are new to the idea of film as an academic subject. I'm committed to communicating to students the importance of cinema as the most powerful art form of the twentieth century, and its lasting impact on all arts, as it continues to shape the structures of contemporary culture. As it is popular in its appeal, and radical in its practices, studying cinema opens up important questions about how we communicate knowledge, belief and meaning, and the role of technology in the forming of culture. From the first seminar of a first year introductory course where we explain what is meant by mise-en-scene to a final year tutorial's complex discussion about how the 'echo chamber' of idealised girlhood might be prised open via film, I am determined that students should be excited by and informed about the role of cinema in our world. I was shortlisted for Best Supervisor in the 2015 Student Guild Teaching Awards.