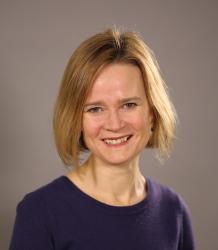 Professor Sally Faulkner is a film historian who specializes in Spanish- and Portuguese-language cinemas and television. Her research interests in gender and feminism, politics and production histories, and aesthetics and questions of value have led to an established body of work, published in English and Spanish, that questions what is included and what is excluded in national and international film histories.

As Principal Investigator, she currently leads a five-year interdisciplinary and international research project, funded by the British government's Arts and Humanities Research Council: Invisibles e insumisas / Invisíveis e insubmissas: Leading Women in Portuguese and Spanish Cinema and Television, 1970-1980. She works with Co-Investigators Professor Núria Triana Toribio (University of Kent), Professor Hilary Owen (University of Oxford) and four Post-Doctoral Research Fellows. The first of these, Dr Jara Fernández Meneses, is now Lecturer in Film at the University of Southampton. Dr Olivia Glaze and Dr Mariana Freijomil are currently working on the project, with a fourth to be appointed presently.

Her leadership roles have championed the multi-lingual and interdiscplinary work that she herself researches and teaches. Most recently, as Assistant Deputy Vice Chancellor for Europe, she led the University's engagement with Europe across both the teaching and the research of our three Faculties, and remains the University representative on the Academic Council of Venice International University, a consortium of 20 international universities in which Exeter is the only UK member. Her Europe blog was published here, while multilingual versions of University Europe news stories she curated may be found here. In her previous role as Associate Dean for International and Development in the College of Humanities she founded the annual in-conversation lecture Languages in a Global World. As Head of the Department of Modern Languages, and Director of Research for Modern Languages with responsibility for the department's REF 2014 submission, she founded the interdisciplinary research Centre for Translating Cultures, and developed Latin American Studies at Exeter, whose activites are hosted in the Exeter Centre for Latin American Studies.

Contribution to the Discipline

Professor Faulkner is a member of the Editorial Boards of Legenda, UK, and of GeNueve Ediciones, Spain. She has previously held membership of the Arts and Humanities Research Council Advisory Board for Modern Languages, the Arts and Humanities Research Council Peer Review College, and of the Executive Committee of the Association of Hispanists of Great Britain and Ireland.

Professor Faulkner is founder of Languages in a Global World, which brings notable speakers who are graduates of Languages to Exeter to share their experiences in an in-conversation event aimed at local schools, the wider public in the South West, and students and colleagues across the University. She is also founder of the Centre for Translating Cultures , which holds regular seminars, workshops and symposia, and supported the launch of the University Centre for Latin American Studies, EXECLAS. Professor Faulkner regularly organizes further events relating to either Languages, Film, or both, aimed at wider audiences, including schools (see External Engagement and Impact,) or academic audiences:

From 2000 Professor Faulkner has spoken on over 30 occasions as key-note speaker, invited speaker or conference participant at events in the UK and internationally. Recent selected speaking engagements include:

Professor Sally Faulkner currently leads, as Principal Investigator, a 5-year interdiscplinary and international research project 'Invisibles e insumisas / Invisíveis e insubmissas: Leading Women in Portuguese and Spanish Cinema and Television, 1970-1980.' Working with Co-Investigators, Professor Hilary Owen (University of Oxford) and Professor Núria Triana Toribio (University of Kent), alongside four Post-Doctoral Research Fellows, the project will produce the first ever 'history from below' account of women working in the Portuguese and Spanish industries in the 1970s, the decade when fascist dictatorship ended in both countries, and subsequent legislative changes permitted women to work outside the home. By publishing monographs, volumes of interviews and special issues of journals, the project will add the critical transnational dimensions of Spanish and Portuguese history to current, worldwide, predominantly Anglophone, debates on women in the film and television industries today. By working with film festivals in Portugal, Spain and the UK the project will share its research with wide public audiences, as well as bringing a critical gender dimension to film and education initiatives in Portugal and Spain.

The common theme of Professor Faulkner's research is a focus on what is included and what is excluded from national and international film histories. Literary Adaptations in Spanish Cinema (Tamesis 2004) (forthcoming in Spanish translation with Iberoamericana-Vervuert in 2023) explored why literary adaptations, in both film and television, had been overlooked, beginning her subsequent investigation of the exclusion of works deemed 'middlebrow'.

A Cinema of Contradiction: Spanish Film in the 1960s (Edinburgh University Press 2006) was the first book in English to focus on Spanish New Cinema, which allowed the inclusion of Spain in Anglophone film histories of New Cinemas, as well as teaching Spanish cinema in English. This volume also addressed the previous exclusion of popular cinema in studies of art film. The revised and expanded Spanish version of this book, Un cine contradictorio: ocho filmes españoles de la década de 1960 (Iberoamericana-Vervuert 2022), focussed on the exclusion of gender, with two new chapters on feminism, female directors and memory. Professor Faulkner's work on Portuguese film, which includes a special issue Portuguese Film: Colony; Postcolony; Memory, co-edited with Mariana Liz (Lisbon) in 2016, focuses on these questions in national Portuguese, and postcolonial African, contexts.

Her third monograph, A History of Spanish Film: Cinema and Society 1910-2010 (Bloomsbury Academic  2013) is a major study of 100 years of cinema that established the previously overlooked 'middlebrow' as an approach that draws together textual analysis and contextual consideration of class. Its publication in Spanish in 2017 with Iberoamericana-Vervuert introduced the term to Spanish-language studies of the national cinema, while her prize-winning edited volume Middlebrow Cinema (Routledge 2016), available on Open Access, tested the purchase of the 'middlebrow' across national and transnational cinemas beyond Spain, from the 1930s to the present. What emerged from these projects was that the exclusion of the 'middlebrow' was often based on gender - both a perception of a text as 'feminized', or an assumption about women's work- laying the ground for Professor Faulkner's current project on gender and leadership in Spanish and Portuguese film and television.

Professor Faulkner offers research supervision in the following areas. Please get in touch with her if you have a strong academic record and well-defined research proposal for your potential thesis. She is also happy to receive enquiries from international doctoral students who wish to spend a period at Exeter under her supervision, and from specialists who already hold PhDs and wish to undertake post-doctoral work at Exeter.

Dr Jara Fernández-Meneses. The first Post-Doctoral Research Fellow on AHRC-funded 'Leading Women' project and now Lecturer in Film at the University of Southampton.

Dr Olivia Glaze. The second Post-Doctoral Research Fellow on the AHRC-funded 'Leading Women' project. Dr Glaze holds a PhD in Portuguese literature from the University of Oxford 'Gender and the Embodiment of Trauma in Post-Imperial Portuguese Women's Writing' (awarded 2022).

Professor Faulkner runs, or co-runs, the following events that connect her two areas of expertise, Film and Languages, especially Spanish and Portuguese, with public audiences, including local schools.

Professor Faulkner collaborates regularly with Exeter Phoenix, and has organized film screenings and events in connection with her research interests in cinema and feminism (for example her screening of Independent Miss Craigie [Thynne 2021]) and Spanish, Portuguese and Latin American cinema (for example, the 2019 VIVA Spanish and Latin American Film Festival, which featured a special screening of Fernando Fernán Gómez's 1963 El mundo sigue [Life Goes On] subtitled by University of Exeter students and introduced by the original producer's son, the Spanish director and producer Juan Estelrich).

With Professor Will Higbee and Professor Danielle Hipkins she co-runs the Subtitling World Cinema project, which seeks to make currently unsubtitled foreign-language films available to English-speaking audiences through free streaming. Fernando Fernán Gómez's Life Goes On was the first film to be subtitled through this project.

In collaboration with the Chagford Film Festival, Professor Faulkner curates an annual Hispanic Cinema Day, which launched in 2018, and which hosted an event on Hispanic cinemas and traumatic pasts in 2021.

From 2023, Professor Faulkner and the Leading Women project team will publically screen Spanish and Portuguese films subtitled into English for the first time.

In 2019 she co-hosted the Jornada didáctica del español, a training day for South-West teachers of Spanish at primary and secondary school (both GCSE and A-level) in collaboration with the Spanish Embassy, at the University. The second event took place in 2021 and Hispanic Studies colleagues at Exeter plan regularly to host this important event.

Professor Faulkner has taught across both Film Studies and Hispanic Studies undergraduate degrees at Exeter, as well as contributing to Masters degrees in Film and Television Studies, Translations Studies and International Film Business. She has established a pathway in Hispanic film on these programmes, growing from introductory lectures on team-taught modules at first year, to specialist second and final-year courses. In 2018 she introduced a Field Trip for undergraduate students, taking the finalists studying her Pedro Almodóvar course to Chagford Film Festival in Devon.

Professor Faulkner attended Wellsway Comprehensive School, Bristol, from where she won a place to read Modern and Medieval Languages (French and Spanish) at the University of Cambridge. She graduated with a double first and a distinction in spoken language, and went on to gain an MPhil in European Literature (distinction) and PhD in Spanish, both University of Cambridge. As a postgraduate research student she held the positions of 'Supervisor of Studies' for undergraduate teaching at Fitzwilliam College, and  'Women's Officer' for the Fitzwilliam College Postgraduate Community. She was appointed to a permanent lectureship at the University of Exeter in 2001 and was promoted to Senior Lecturer in 2006. Following a career break for caring responsibilites over 2006-11, she was promoted to Associate Professor in 2013 and a personal chair in 2015, thereby becoming the first woman to hold a Professorship in Hispanic Studies at Exeter.