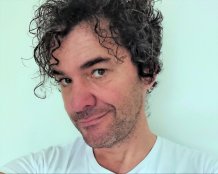 Award-winning innovative film director and writer Mark Cousins will discuss his prestigious career and influences during a free public event at the University of Exeter this month.

Mr Cousins work has premiered in Cannes, Berlin, Sundance and Venice film festivals and won numerous international awards, including the Prix Italia, a Peabody and the Stanley Kubrick Award. He was the youngest ever director of the Edinburgh International Film Festival.

His films and books are inspired by his huge range of influences - from writers, artists and musicians, as well as travelling and working around the world. Mr Cousin has tattoos of the names of his heroes – including Virginia Woolf, Paul Cezanne and Marie Curie on his arms because he wanted to mark their influence on his skin.

Mr Cousins, whose films include I Am Belfast, about his home city, The First Movie, The Story of Film: An Odyssey, What is This Film Called Love?, Life May Be, A Story of Children and Film, Atomic, Stockholm My Love and The Eyes of Orson Welles, will discuss his tattoos as part of the event, and show the audience one of the tiny digital cameras he uses to make his films.

The discussion is part of the University of Exeter’s Creative Dialogues series, a series of ‘in-conversation’ events showcasing a range of high-profile speakers who are leaders in their respective fields across the creative industries and humanities.

Mr Cousins will be in conversation with Don Boyd Hon DLitt, film director, producer, screenwriter and novelist, and Honorary Professor in Film Practice at the University of Exeter, who has produced his films. The pair will also discuss Mr Cousins’ work with renowned cinematographer Christophr Doyle and the impact of growing up in Belfast during the Troubles.

The Creative Dialogues events offer rare opportunities to join internationally renowned professionals in person and learn first-hand about their careers and the creative process as well as their unique perspective on the impact of the creative and performing arts on the world we live in.

Mr Cousins, who is an Honorary Professor of film at the University of Glasgow, has written books including Imagining Reality: The Faber Book of Documentary, The Story of Film and the The Story of Looking. They have been published around the world. He writes for Sight & Sound and Filmkrant and has collaborated with Tilda Swinton on innovative film events. He is the Chair of the Belfast Film Festival, a Patron of the Edinburgh International Film Festival and a board member of Michael Moore’s Traverse City Film Festival. His new project is a 15 hour documentary called Women Make Film, which rethinks cinema and is narrated by Jane Fonda and Tilda Swinton.

Professor of Film Studies, Will Higbee says: ‘We are delighted to welcome Mark Cousins to the University of Exeter for the next in the series of Creative Dialogues. This event is a fantastic opportunity for students, staff and the wider community –  indeed, anyone with an interest in art, culture and the power of film - to hear from one of British cinema’s most knowledgeable and innovative talents.”

The discussion takes place on Thursday, January 24 from 7:15 to 8:30pm in the Alumni Auditorium at the University of Exeter’s Forum building. Register at https://www.eventbrite.co.uk/e/college-of-humanities-creative-dialogues-series-registration-54638789089