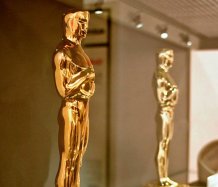 A PhD student from the University of Exeter and the London Film School has been awarded an Academy Award for Best Foreign Language Film.

The film, A Fantastic Woman, was written and produced by Gonzalo Maza, who is currently working towards his PhD in Film at the University, alongside director Sebastián Lelio.

A Fantastic Woman tells the story of a transgender woman called Marina following the death of her much older partner, Orlando, and the investigations that follow as she is treated with heightening suspicion.

Speaking before the ceremony Gonzalo said, “Clearly, I felt enormously privileged to hear our film was nominated for the Academy Awards. It was exhilarating.

“And living through this at the same time as being a postgraduate student at the University of Exeter and London Film School is a rewarding experience".

Prior to coming to the United Kingdom, Gonzalo  worked as a newspaper journalist and film critic in Chile.

Dr James Lyons, Gonzalo's supervisor at the University of Exeter, said: "We’re delighted by Gonzalo’s success, which is a testament to his tremendous talent as a screenwriter, and is also the basis for his innovative research project here at Exeter and the London Film School."