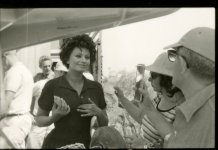 Pamela Davies was one of the foremost continuity supervisors in the British film industry. Picture of Sophia Loren by Bob Penn.

A unique collection of rarely seen photographs showing stars such as Judy Garland and Laurence Olivier making some of British Cinema’s most-loved films can be seen for the first time.

The photographs show actors – also including Sophia Loren and Peter Sellers – on set preparing for shooting or relaxing between takes. They capture behind the scenes in Judy Garland’s last film, child stars rehearsing while making Oliver! and the cast of Richard III sweltering in full armour while shooting in Spain.

The collection of pictures belonged to Pamela Davies, one of the foremost continuity supervisors in the British film industry, who worked from the late 1940s to the mid-1980s on dozens of movies. They were probably taken by photographers who were part of the crew. They have been donated to Britain’s leading cinema museum, The Bill Douglas Cinema Museum at the University of Exeter.

Continuity workers made sure that shots were consistent and were always present on set watching the actors and working closely with the director. They kept a record of each take as well as dialogue, direction of movement, characters’ positions, props and furniture so the next shot will follow exactly, even if filmed some time later. Some of the pictures would have been used by Pamela for her work and show action in front of the camera, but others show preparations and relaxation in the studio or location between shots. In later years continuity supervisors took Polaroids on set. Part of the donation are Polaroids from the last film Pamela worked on, Steaming, directed by Joseph Losey.

The pictures from the set of Oliver!,one of the best loved British films of the 1960s, show the filming of the “Consider Yourself” musical number and charming scenes of child stars Mark Lester and Jack Wild rehearsing together on the Victorian set. Jack is wearing fashionable clothing of the time, while Mark has a school blazer over his Oliver Twist costume. Other pictures show dancers, also in their Carnaby Street finery, practise their dance routines for the number on a set of a Dickensian London market.

The picture show Judy Garland on set at I Could Go on Singing, her last ever film, made in Britain in 1962 and co-starring her great friend Dirk Bogarde. Judy is seen rehearsing for her musical numbers and on location in Canterbury, laughing and joking with Bogarde and the crew while filming at Canterbury Cathedral and at a schoolboy rugby match. Much has been written about her troubled state of mind at the time and the difficulties she found making the film, which was not a hit. In his memoir Snakes and Ladders Bogarde talks about their intense friendship and work together on the film. He felt that Garland gave the “most perfect moments of supreme screen-acting I have ever witnessed”.

The pictures from Richard III show location shooting in Spain, bizarrely standing in for Leicestershire, with actors including Sir Laurence Olivier and Stanley Baker sweltering in full armour while the production crew go shirtless.

Sophia Loren is shown in 1965 filming Judith, the epic about the beginnings of Israel alongside Peter Finch. Contact sheets taken by stills photographer Bob Penn show Loren relaxing between takes and being doused with water by the crew ready for a scene.

Continuity was one of the few jobs in the film industry that was predominantly female and Ms Davies was a respected figure at the top of her profession for over 30 years.

Dr Phil Wickham, curator of the Bill Douglas Cinema Museum, said: “We are absolutely delighted to have been gifted these photographs belonging to Pamela Davies, who was a key figure on film sets for so long. Many of the pictures have rarely been seen before. They reveal the process of making films in this period, as well as showing some of cinema’s biggest stars as they worked. They are another important element in the story of moving image that The Bill Douglas Museum tells to our visitors and researchers.”

The Bill Douglas Cinema Museum is both a research resource and a public museum, free and open every day to all. It has the largest publicly accessible collection of film memorabilia in the UK and is one of the foremost moving image museums in the world, holding over 75,000 items. The museum is named after the celebrated art-house filmmaker Bill Douglas. Bill was also a collector and the collection of artefacts he put together with his friend Peter Jewell founded the museum.